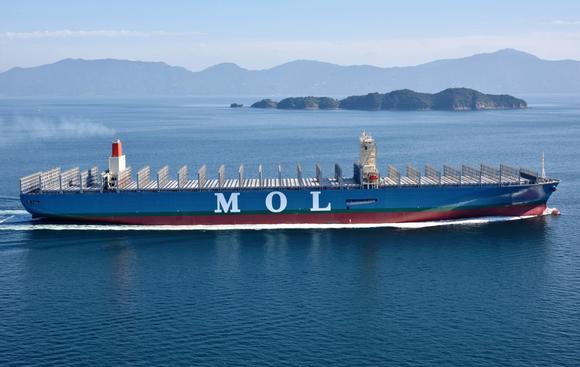 But ill effects are appearing when viewed on an industry-wide basis. The 11 commissioned 20,000 TEU ships as of October are forecast to become 70 by 2020, the Japan Maritime Center says, and all likely will be devoted to long-distance routes from Asia to Europe. In September, France's CMA CGM confirmed an order for a 22,000 TEU vessel, as shippers worldwide bulk up their crafts.

The capacity glut sparked last year's historic shipping struggles. Combined with a slowdown in the movement of goods, spot rates for Asia-Europe freight in March were nearly $200 per 20-foot container, one-third of the price from the year-earlier period. The slump also triggered industry consolidation, such as the bankruptcy of South Korea's Hanjin Shipping.

"Integration is reducing the number of players," Ikeda said. "The market will not collapse from 20,000 TEU ships."

Integration will help shippers reduce service during the offseason and take other measures to maintain freight rates. But "even without similar price battles as in the past, raising rates substantially will become difficult as vessels grow more massive," said an official from a major Asian shipper.

The impact will spread beyond European routes. As vessels get larger, the previous generation of ships are reassigned to North American and Asian routes. This means the ships servicing each route continually become bigger, one reason that freight rates for European and North American routes are trending downward despite cargo volume growing at a record pace this year.

"I had predicted that the containership market would tighten starting in 2019," said Hiroshi Hasegawa of SMBC Nikko Securities. "That scenario will fall apart should orders for large ships continue further."

Though large, low-cost vessels are necessary to win a contest for cheaper rates, the latest megaships may propel the shipping industry's next price war.