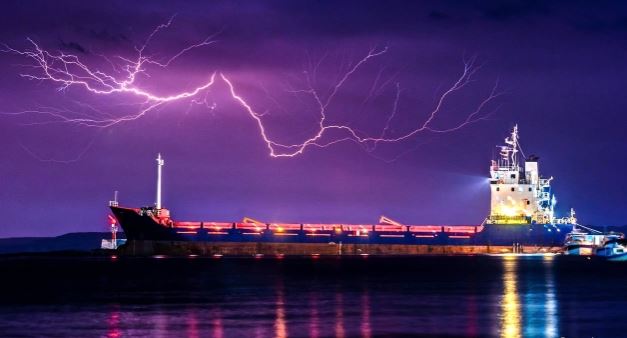 MODERN, broad-beamed merchant vessels are well able to withstand the rough and tumble of the waves, but sailors still prefer to avoid storms at sea if they can. Containers may come loose in heavy weather and there is always a chance of lightning knocking out communications.

It is therefore ironic that some storms may be caused by ships themselves. That, at least, is the conclusion reached by Joel Thornton of the University of Washington, in Seattle, and his colleagues in a paper just published in Geophysical Research Letters. They demonstrate that lightning strikes the Indian Ocean and the South China Sea almost twice as often along shipping lanes as it does other areas of these waters.

Dr Thornton and his team considered 1.5bn strikes recorded in this part of the world by the World Wide Lightning Location Network (an international collaboration led by Dr Thornton’s colleague, Robert Holzworth) between 2005 and 2016. As the map shows, those strikes that happened over the ocean were concentrated in places most plied by ships. In particular, the shipping lane that passes from the south of Sri Lanka to the northern entrance of the Straits of Malacca, and thence down the straits to Singapore, positively glows with lightning. (Its westward extension to the Suez canal was outside the study area.) So do the lanes from Singapore and the western part of Malaysia that head north-east across the South China Sea.

Neither changes in vertical wind shear nor differences in horizontal air movements seem likely to be causing this concentration of thunderstorms, for other measurements suggest that these weather-modifying phenomena are the same inside shipping lanes as they are in neighbouring parts of the atmosphere immediately outside those lanes. Nor does it seem plausible that the ships themselves (admittedly made of metal, and also the tallest structures on what is otherwise a flat surface) are responsible for attracting all the extra strikes involved. Though the area of the lanes is small compared with the whole ocean, it is vast compared with the area actually occupied by vessels. Most of the extra bolts are hitting the sea rather than craft sailing across it.

Particle accelerator
The most likely explanation is particulate pollution emitted by the ships using the shipping lanes. Marine diesel burned offshore is generally high in sulphur, and its combustion produces soluble oxides of that element which act as nuclei for the condensation of cloud-forming droplets. Typical marine clouds in unpolluted areas are composed of large droplets and do not rise to high altitude, but Dr Thornton and his team reckon that smaller droplets, of the sort that condense around oxides of sulphur, might more easily be carried upward by convection—forming, as they rose, into towering storm clouds that would act as nurseries of lightning bolts.

As to what can be done about this extra lightning, change may already be in hand. At the moment, standard “bunker” fuel has an average sulphur content of 2.7%. From 2020 that should fall to 0.5% if refiners and shipowners obey rules being introduced by the International Maritime Organisation, the body responsible for trying to impose order on the world’s shipping.

Ships are also being sailed more efficiently, often by slowing them down, which reduces the amount of fuel consumed per nautical mile. That is how Maersk Line—one of the world’s biggest container-ship operators—has cut its fleet’s fuel consumption by 42% since 2007.

On top of this, ship propulsion is becoming more efficient, as heat-recycling systems and new types of engine are introduced. In a few decades, therefore, the storminess of shipping lanes may have returned to normal. In the meantime, for any who may doubt humanity’s ability to affect the weather, Dr Thornton’s work provides strong evidence that it can.